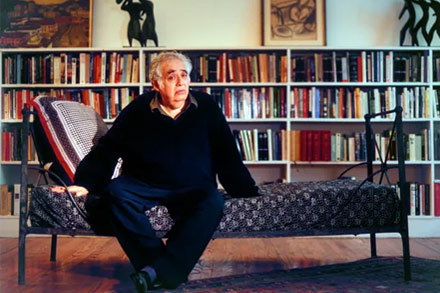 When I went to see Harold Bloom, who died this week, I was surprised to find that his front door was open. Washington Square, in Lower Manhattan, in 1999, was well known for its drug deals and permanently parked ambulances in the park across the street.

But nothing seemed to phase this literary giant whose physical presence and affable personality matched his giant intellect. Already the author of upwards of 40 books, and the most valiant defender of The Western Canon, of which Shakespeare was God, he spoke to me about the other God, the one that most Americans believed in.

I had just read one of several books he had written in religious criticism, The American Religion, and this is what he told me:

You know, I can never get over a very curious statistic. Every other year the George Gallup organization does a survey of American religion, and there’s always one thing in it that I find daunting, because the percentage never changes. It doesn’t surprise me that 93% of all Americans say that they believe in God, that’s a rather unusual percentage, since only in Ireland, both north and south, can you find the higher percentage of citizens saying they believe in God. But what shocks me, what fascinates me, what endlessly engrosses me, is that 89% of Americans consistently say that God loves him, or her, on a personal and individual basis. Now that is extraordinary in the history of religion, an undoubtedly tells one too much about the American ethos and about the American psychology. It certainly tells one rather too much about American spirituality. I always like to juxtapose to this the great statement of Baruch Spinoza, the most un-American of all religious statements, which goes: ‘We should love God without ever expecting that God will love us in return.’ A piece of very powerful wisdom indeed, but I repeat, absolutely un-American.

That comment from our interview became part of my radio documentary, ‘Civil and Uncivil Religion in America,’ which won me my first Gold Medal at the New York International Radio Festival.

I was intrigued by Harold Bloom’s interest in religion, because although most people knew him as the arch defender of the Western literary canon, it seemed to me his abiding interest was anthropological and religious. Indeed, his book Shakespeare, the Invention of the Human, 1998, underlined this, as did his brazen launch into Biblical criticism, with The Book of J in 1990. His theory that a woman had written the first five books of the Bible as a literary creation, not as religious scripture, reflected the emerging interest in Gnosticism, following the translation of the Gnostic Gospels by Elaine Pagels. I wanted to know how he understood the unique way in which Americans cultivated and enjoyed a personal relationship to God that relied less on ritual and more on the presumption of a personal and intimate relationship. This is how Bloom explained it:

I think there is a profound sense in which gnosis, with a very small ‘g’ is fundamental to the American spirituality of the last two centuries, and that we are a nation of unknowing gnostics. Gnostics without knowing that we are gnostics. The most profound influence upon American life and character is the belief that freedom depends upon being alone with that ancient self, which is after all the divinity and with whatever outward manifestation of divinity, the Christ as it were, who then comes to one, to talk to one, as equal to equal. So that produces I think, the counter that in the end what most typifies the American consciousness, rather peculiar when you consider it, even though we do have here this vast land area of 3-million square miles, still we are now 280-million souls, and yet in some deep sense no American ever feels free unless she or he is quite alone.

Harold Bloom’s death at 89 this week ended a career of a man who “flew in the face of almost every trend of literary criticism of his day .”

No wonder he was such an original and deep thinker, a man who defended his turf and yet left his door open to new vistas. This “Yiddisher Dr Johnson” as he was once called had already travelled far beyond his Bronx beginnings, the son of a garment worker. In so many ways, he embodied the American Dream.