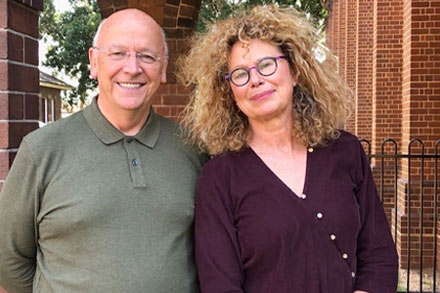 Launching the Sacred Silence in Religion Literature and Arts conference at Australian Catholic University, Strathfield (4-5 October), I was delighted to meet again with Father Laurence Freeman, the Director of the World Community of Christian Meditation.

An example of how the world-wide interest in meditation also has its Christian expression, Father Laurence, who led the audience in meditation, suggested it be accompanied by the silent repetition of the Aramaic phrase, Maranatha (‘The Lord Come’).

For some the WCCM has become a low-key entre into a Christian tradition from which they have drifted far afield. Perhaps uncomfortable with doctrinal formulas or unschooled in the scriptures, the practitioner of Christian meditation is given an alternative to prayers that presuppose a personal relationship to God. The simple request for the presence of God fits with a generation which is diffident about such a relationship, and it leaves open the way in which the Divine presence may be experienced.

For many of those in the corporate world, whom Father Laurence addresses in his busy international speaking commitments, Christian meditation has also become a way of learning to still the mind and emotions that have made anxiety and stress, with all its attendant illnesses, so prevalent in professional and business life.

This largely silent practice aligns with the growth of silent retreats in our world that has been built on the promises of mindfulness meditation taught by both secular and religious teachers from Buddhist and Yogic traditions. There is no doubt that this has become a default practice for multitudes of people who say they have ‘no religion’ and yet are seeking some form of spiritual comfort in a world that has become increasingly demanding, especially via the constant buzzing, pinging and flashing of your mobile phone.

Silent meditation is the contemporary world’s cut-down version of the Biblical Sabbath. Everything stops for a while, giving you the time and space to recoup your essential self.

Silence is not enough

Silence is therefore a welcome retreat from the noisy world, but it is not in itself the sum total of the spiritual life. While the silent treatment may quieten your anxiety in a world that feels unsafe and burdened with problems, how does it help to change that world?

If your silence offers only a blanket of calm to help you sleep, how does it approach being a true remedy, for if the world isn’t safe, then you are not safe either.

And the same is true in your own life. Silence is not a remedy if it is only a retreat from the troubles that beset you. The pioneering psychological researchers, Dr Miguel Farias and Catherine Wikholm, authors of The Buddha Pill (2015), challenge the conventional wisdom that meditation is always a path to healing.

Many times in our history, ‘sacred silence’ was broken by those who were deeply moved by the human anguish they witnessed around them. The words of the German Protestant pastor, Martin Niemoller, who supported National Socialism in the 1930s, are so well known because it encapsulated the dawning awareness of the dilemma of keeping silent.

‘First they came for the socialists, and I did not speak out –

because I was not a socialist.

Then they came for the trade unionists, and I did not speak out –

because I was not a trade unionist.

Then they came for the Jews, and I did not speak out –

because I was not a Jew.

Then they came for me –

and there was no one left to speak out for me.’

The Jewish tradition has many injunctions against speaking harsh words, not shaming people publically and holding your tongue in the face of enemies. “Say little and do much” is the advice in the ethical treatise, Sayings of the Fathers, while another rabbi counsels that "the good say little and do much while the wicked say much and do little.”  (The Fathers of Rabbi Nathan)

But there is a time when breaking the silence is paramount, and the suffering of many can no longer be swept under a carpet of silence. There are many women today who are speaking out against injustices, most especially in countries where their religious leaders grant them far fewer freedoms than men and force them to remain bound by sacred silence. They often pay a high price for their civil disobedience.

I am reminded of another pastor, the Protestant Lutheran theologian, Dietrich Bonhoeffer (1906-1945), who resisted the Nazis’ inhuman policies and totalitarian grip on Europe’s nation states. He wrote:

“Some seek refuge from the rough and tumble of public life in the sanctuary of their own private virtue. Such men however are compelled to seal their lips and shut their eyes to the injustice around them. Only at a cost of self-deception can they keep themselves pure from the defilements incurred by responsible action.  For all that they achieve that which they leave undone will still torment their peace of mind.”

Dietrich Bonhoeffer was hanged at the end of the war and his young yet spiritually profound life came to an end. Yet his words have never fallen silent and his heroic deed speaks louder than them all.