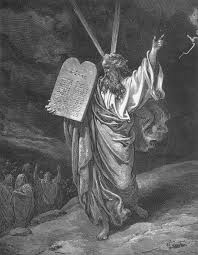 At one level the question is ‘academic’.  When the Paul Ramsay Foundation proposed to establish a Centre for Western Civilisation to teach courses at major Australian universities, it caused an unholy row among largely left leaning academics who called it a supremacist, colonialist and jingoist move.  Of course, it was nothing of the sort, but that didn’t stop a hundred academics signing a letter published in The Guardian Australia alleging the same.

It did however raise the question, what is Western Civilisation, and should we be for it or against it?  At the bedrock of the West is an extraordinary ‘book’ made up of scores of books, authors, and subjects, yet all addressing the question of how to be faithful to a Covenant with God. The Hebrew Bible, written over some hundreds of years and canonised around 400 BCE, is unique in world literature.

At the core of this relationship between a people, Israel, and their God is the Law.  The Ten Commandments which begin with the declaration, ‘I am the Lord your God, who took you out of Egypt, you shall have no other God’s before me,’ anchors what follows in a sacred narrative and a trust that brooks no rivals.  The narrator emphasises that ‘all Israel’ was gathered to hear the law, which applies to everyone.

The Ten Commandments, which are largely about how one behaves in a familial and communal context, with honesty (‘Thou Shalt not bear false witness’) and respect (‘Thou shall honour thy mother and thy father’ ‘Thou Shalt not commit adultery’), with regard for human life (‘Thou shalt not murder’) and with humility (’Thou shalt not steal’ ‘Thou shalt not covet thy neighbour’s goods’) are the foundation of Western law.  That is why they are frequently found outside law courts, especially in the United States, and in the British Parliament.

The concept of law that everyone in society is bound by, with no exceptions, is fundamental to the idea found in the Book of Genesis that all men and women are made in God’s image, and therefore are both responsible and worthy of respect.  Slavery, for example, was opposed and finally overturned in the 19th Century by Christian Abolitionists who based their argument on the belief that all people were ‘made in God’s image.’

The Jewish contribution to Western civilisation goes far beyond the Bible, which was in need of interpretation.  The rabbis, who argued over its manifold meanings, collected their discussions in the Talmud.  The concept of inquiry, argument, and the acceptance of different opinions characterised rabbinic thought.  So impressed were the Greeks that they regarded the rabbis as a ‘philosophical school’.  Much later, the most revered rabbi, Moses Maimonides (1135-1204), returned the compliment and reconciled Aristotle’s views with Judaism in his most famous work, Guide for the Perplexed.

There are numerous ways in which Jewish thought and creativity shaped the Western world, particularly in the modern era, but given history of persecution and attempted annihilation of the Jews in Europe, how could they defend Western civilisation?  Some would argue that the Holocaust, with its organised and mechanised murder of millions of Jewish citizens, is the supreme example of what is wrong with Western civilisation.

The Holocaust occurred in the midst of Europe’s most evolved period of modernity.  Technological advances had delivered the industrial train system; medical advances gave us the life-saving serum of penicillin and the diagnostic tool of radiography; while the creative arts flourished and were available to the masses through the newly invented cinema.

The same advances also enabled the train transport of millions of Jews to concentration camps, where they were exterminated by the pharmaceutical invention of Zyklon B Gas, while film and newspapers, once a source of entertainment and information, delivered propaganda of the kind that promoted Jewish fellow citizens as the ‘vermin of Europe.’

Technology, science and the arts were used for diabolical purposes, tearing asunder a Europe that had in the modern era been held together by a common adherence to the law, and by a series of mutual agreements to allow Protestants, Catholics and Jews to live side by side.

And yet, I would argue that the Holocaust did not characterise Western Civilisation, but was the most concentrated example of its failure.  (Previously, the 30 Years War, between 1618 and 1648, between Catholics and Protestants, resulting in 8 million dead, was another.)  In particular, Nazism was the antithesis of the Biblically based belief in the redemption of the world through acts of righteousness.

Nevertheless, on the wreckage, the West was determined to develop societies where freedom of religion and freedom of speech were safeguarded, which meant that in the years and decades after the Holocaust the full dimensions of its horror were documented and denounced.

And even though not all the Nazi perpetrators were tried and convicted at Nurnberg, a newly adopted offense in international criminal law of ‘crimes against humanity,’ in the Charter of the International Military Tribunal (or Nurnberg Charter), confirmed a broad consensus that the Holocaust was profoundly evil and required a collective redress, repentance, restitution and repair by the nations that caused it.

This also prompted the churches to renounce their own history of antisemitism, and its recurrence today, as the the Pope’s recent comments attest:

In the last century we saw so many brutalities against the Jewish people, and we were all convinced that this was over. But today, the habit of persecuting the Jews, our brothers and sisters, is here reborn. This is neither human nor Christian….The Jewish people are our brothers, and they should not be persecuted.  Understand?

Civilisations do not always live up to their ideals – far from it-- but one of the key factors in the West is its ongoing self-interrogation, first etched in the Biblical tradition which rarely let anyone off the hook.  Didn’t Abraham himself argue with God to spare the righteous people of Sodom?   (Genesis 18:16-33)