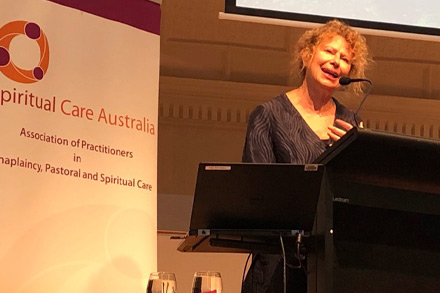 Imagine a room full of people who know how to relate meaningfully to patients and their families when they are faced with life threatening illnesses. That is what it is like to be at a Spiritual Care Conference, with spiritual care practitioners, chaplains, psychologists, social workers and counsellors coming together to learn new ways to improve their skills.

Often the best way to do that is to hear from people who have been on the receiving end of the health system.

There are few places that you would expect to encounter a conversation between a traditional Jewish divorced woman, who escaped a violent marriage, and a seasoned journalist, who spent 23 years covering war and conflict and suffered the effects of losing colleagues in the cross fire.

As different as the source of their grief was, both Tanya (not her real name) and Dean Yates were in need of mental health care. Yet, at first, what they experienced was its limitations. Rather than turn around their distress and depression, their encounters with hospital staff were at times alienating and counter-productive, plunging them further into their distress.

Then something happened. It wasn’t the prescription of a new more powerful drug. In each case it was the arrival of an individual who knew how to cross that bridge to where Tanya and Dean were and bring them out of their psychological and emotional isolation.

For Tanya, who is University of Melbourne educated, a CPE* Intern, (someone who is studying the spiritual care discipline) came to see her who was open and sensitive to understanding where ‘she was coming from.’ This meant that she came to understood the cultural-religious background that informed Tanya’s life choices, her expectations, and the sacred importance of the family, which in Jewish parlance is referred to idealistically as ‘shalom bayit’ (a peaceful home). The worker also understood Tanya’s profound pain and sense of self-betrayal at keeping up a one sided ‘peace’ at the expense of her own mental health.

That meeting was the first time Tanya felt ‘held’ in a caring embrace that understood all the dimensions, including the spiritual depth, of her grief. The dialogue that blossomed between her and her spiritual care practitioner was meaningful, deep and restorative of Tanya’s sense of self, which she felt had ‘floated away,’ as she described it, in the hospital. She also began to feel her sense of self-worth returning.

For Dean Yates, being back in Melbourne’s Austin Health in 2017, where he’d first been diagnosed with PTSD in 2016, was something his wife suggested he needed to do. She could tell that he wasn’t coping. So back he went to Ward 17. But this time a young spiritual care practitioner came to see him with just the right ‘credentials’ to help him deal with the loss of two Iraqi journalists whose death by ‘friendly fire’ had haunted him for nearly 10 years.

Cath Slarks helped him construct a memorial service for the killed journalists, which they held in the hospital chapel. After ten days of planning the ritual, Dean and Cath, went through the motions, with Dean asking forgiveness from Namir and Saeed, whose photographs were on the altar, followed by Cath pouring cold water over his hands, and dipping her index finger in oil and making the sign of the cross on his forehead, as a symbol of absolution. Then the candles were snuffed out and as Dean said, “I saw the disappearing smoke as my guilt and shame.”

There was much more to Dean Yates’ coming to terms with his own ‘moral injury,’ which in recent years has been recognised as one of the psychological wounds that veterans suffer as a consequence of their service in the field. And Tanya also had a long road ahead of her as she moved from homelessness to returning to a ‘normal life’ in the community. But they were both in a better position to pursue that long and often lonely road.

All of us at the SCA conference were spell bound by the example of these two brave individuals. They not only suffered the pain and shame and guilt of their predicament, but in sharing it with us they overcame, sometimes shakily, the emotions that stirred just below the surface, so that we might better understand how to help others like them in distress.

Spiritual care is primarily about relationships, and the desire to help with sensitivity, experience and skill. It’s about being able to read the culturally embedded signs in people who are locked in to their suffering and can’t find the words to express it. It is also understanding that sometimes the deepest pain can be relieved and even overcome with the profound insights and ancient rituals that constitute the wisdom of our spiritual traditions.