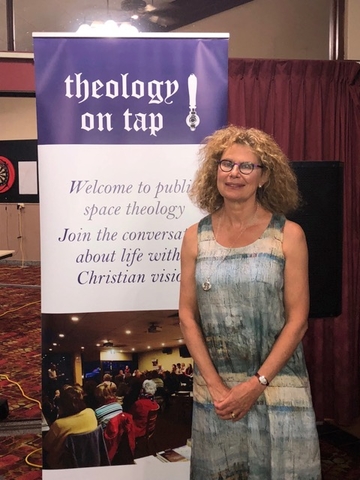 Theology on Tap It was warm sunny evening when I fronted up to about a hundred people for Theology on Tap at the Brook Hotel in Mitchelton. I was invited by Professor Charles Ringma, who founded TOT in 2013, as a way to bring the language of faith into the public space and to engage younger generations of ‘christians’ (the lower case is intentional) to explore the faith dimension of their lives.

The truth is that many people today have little idea about what faith means. More often than not, it is a ‘fire and brimstone’ or ‘intellectual lobotomy’ caricature that they’ve heard about from the professional atheists, like Richard Dawkins or the late Christopher Hitchens. To counter the zombie walk into secularism, Charles and other sympathetic people, like Paul Mercer, realised that if they did not bring the pearls of great wisdom that are found in the Biblical tradition to ordinary folk, the life enhancing experience of faith would be lost. Outside the small groups of people who still regularly meet in their houses of prayer, the faith would fall silent.

Indeed, as I see it, so much knowledge and experience has been lost already, that the spiritual practice of ‘silence’ has held a great allure in the West. Silent meditation is the default position when you can’t recount the dramatic stories of the Bible, don’t know Noah from Jonah, cannot name the gospels or Jesus disciples nor recognise the many pithy sayings of Paul. It’s not that faith is about quoting chapter and verse. It is about knowing what they mean, and how they have given the West models to live by.

Yet silence is not absent from the Western tradition. In fact, the importance of silence is central to the Jewish tradition, which gave us the Bible. God, or the Source of All Life, cannot be named, cannot be pictured, and cannot be reduced to a formula, lest “He” become an idol to be worshipped or a talisman kept for luck. Even “He” is an inaccurate pronoun, since his Divine Presence on earth is referred to as female, “The Shekinah” (Wisdom). In the Bible, God is imagined in a myriad of ways, as a lioness who defends her cubs, as a saviour with an outstretched hand, as a King of the Universe, as a Father who loves his children, as a burning bush in the wilderness and as a voice in the whirlwind. In these and many other ways God is imagined in the Bible, giving the unmistakable impression that there is no place and no thing in which God cannot be found. It takes the wise and discerning to interpret just what that might mean.

Ironically, that is why our Western Biblical tradition is ‘noisy’ with many voices clamouring for interpretation. There is not one Gospel which tells the story of Jesus, but four that have been canonised (and many more of the so called Gnostic Gospels, which did not make it into the New Testament), not to mention the dozen or so letters of Paul and others. There is not one book but 39 that comprise the Hebrew Bible (the Old Testament), and even more stories and writings that are beloved to both Judaism and Christianity but did not make it into their canons. Needless to say, the din of contesting interpretations always benefitted from the advice which counselled the opposite and is found in The Sayings of the Fathers (Pirke Avot), ‘Say little, do much.” Such was the suspicion of words that Rabbi Nathan in Avot de Rabbi Natan went so far as to say, “The righteous say little and do much, and the wicked say much and do little.” Jesus echoed this in the parable of the man with two sons in Matthew 21: A father asks his two sons to work in the vineyard. One said no, but changed his mind and worked in the Vineyard, while the other said yes, and did nothing. Jesus asked, Who is more valued by his father? The right balance between words and deeds is important in other traditions, such as Zen Buddhism, which emphasised silent meditation as a response to the practice of rote learning and intoning of chants, which was meant to smooth the way to enlightenment. Zen teachers saw this as lacking a truly authentic ‘awakening’ and proposed a kind of silent meditation that erased all thoughts, allowing the Bodhicitta (or enlightenment) to arise in the Self.

What of the saying, “Silence is Golden” apparently first used by Thomas Carlyle in English? Is it always appropriate to remain silent even when breaking the silence would cause disruption and pain? For more than two centuries of the modern era, groups of concerned people have have broken the silence on the mistreatment of women and children in Christendom, and more recently in Judaism and Islam. But breaking the silence is usually met with resistance, especially when it shatters the image of what one holds dear. Today, Aboriginal women are breaking the silence on the mistreatment of women and children in their own communities. Recently, Jacinta Price and her mother Bess Price, who have lost many members of their family through violence and communal dysfunction, speak out against those who would prefer them to be silent. But as they remind us Aboriginal culture is not some “Disneyland, fairy tale world.” It has all the flaws of other cultures that need rethinking and reform. We should help them realise that goal, not by silencing them but supporting their just cause. Silence is golden but only in a perfect world.