Together We Stand Breakfast Forum 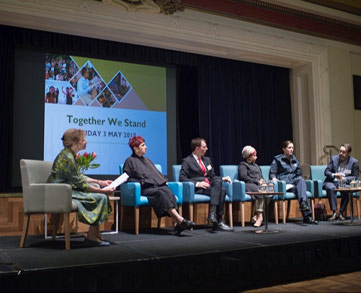 In the wake of an unprecedented rise of antisemitism in Australia and the attack on two mosques in Christchurch, the mayor of Glen Eira City in Melbourne, Cr Jamie Hyams, and the Director of the Anti-Defamation Commission, Dvir Abramovich, organised a special Forum in May to promote the message of inclusion and non-discrimination.

“The Forum was important in helping us gain shared understanding of the impact that discrimination and hate has on some members of our community,” Cr Hyams said.

The keynote speaker, Tasneem Chopra, who is a cross cultural consultant for the Muslim community, spoke about what role councils can play when religious and faith-based denominations feel they are being persecuted globally.